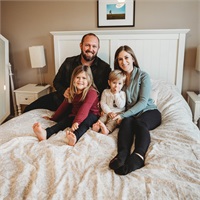 Dave manages my internal and external communications, works with clients to help them create their financial plans, and acts as a conduit to our custodians.

Dave's been married to my stepdaughter Melissa (Baudo) since 2012 and is the proud dad of my granddaughter & grandson, Alexis & Grayson.

Dave has his associates degree in Computer Information Systems. He began his insurance experience in 2010 with GEICO. Starting as a claims representative he obtained his Property and Casualty license, then transferred to the sales department with a focus on auto policies. In 2013 he accepted a position at State Farm as the head of Property and Casualty sales, where he consistently met sales expectations. He became a member of Harvest Capital Assets team in 2015.

Dave holds his series 65 license with plans to pursue his ChFC designation as a Chartered Financial Consultant.

At some point in the future ... all this will be his! Dave is my succession plan.